At the beginning of May 2011 the Austrian Society of Implantology (ÖGI) invited 40 “young” scientists from Austrian hospitals and practices to an innovative conference in Saalfelden, Austria, on the topic of “Implantology 2020” and analyzed and discussed future challenges. Within the framework of interactive workshops the ÖGI committee organized two dynamic days, the aim of which was to provide an opportunity for young “implantologists” to network. The main focus of the conference was to promote young implantologists and the future activity of the ÖGI. Provocative questions and interesting topics covering all aspects of implantology and the future of implantological training and advanced training were discussed at a national level by prosthodontists, maxillofacial surgeons, periodontists and oral surgeons. The meeting of the ÖGI was mainly a powerful signal that young and “older” scientifically active clinicians and practitioners from all over Austria were coming together. Due in particular to the interaction between traditional implantological schools of thought and new, innovative approaches it proved to be appropriate to extend our implantological horizons in the areas of training and advanced training, future trends as well as challenges and demands regarding patients and operators. As a result, a junior delegate was appointed to the ÖGI committee to implement new ideas and to look after the concerns of young implantologists.

As a follow-up project of the young implantologist conference 2011 in Saalfelden, young implantologists and relevant representatives from companies and industry will have the opportunity in 2013 at a further meeting under the auspices of ÖGI to get to know each other and discuss current issues. The focus of the meeting should be networking between young colleagues and developing new ideas, concepts, visions and projects. The results of the meeting will again be published and presented to the readers of the Journal of Dental Implantology (Zeitschrift für Zahnärztliche Implantologie, ZZI). In future, joint activities of the German Society for Implantology (Deutsche Gesellschaft für Implantologie im Zahn-, Mund- und Kieferbereich e.V., DGI), Swiss Society of Oral Implantology (Schweizerische Gesellschaft für orale Implantologie, SGI) and the ÖGI would be conceivable and advantageous in this area.

Promotion of the “young implantologist” agenda should, however, also be institutionalized on an international basis:
taking the example of the Junior Committee of the European Association for Osseointegration (EAO), a German-language young implantologist organization for even better communication and networking of young German-language/European clinicians and practitioners at a clinical and scientific level appears desirable and at least promising. The candidacy of interested young colleagues at their national societies and the setting up of a young implantologist committee could already be an item on the agenda in Berne, Switzerland. We do not regard such activities between our countries as competition to the EAO but as an additional forum, which young, committed clinicians and practitioners can use as a platform.

With this in mind, the next “Back to the roots” joint conference in Berne is a symbol for the cooperation of our societies. Already in the run-up the aim during scientific and economic planning to give this conference a “community” character has been successful despite the difference in size and the diversity in the personnel of the societies. The economic and scientific convergence of the societies prior to Berne 2012 and, hopefully, for Vienna 2015 is a sensible step towards the further development of significant international cooperation beyond industry to meet the challenges of implantology in 2020. 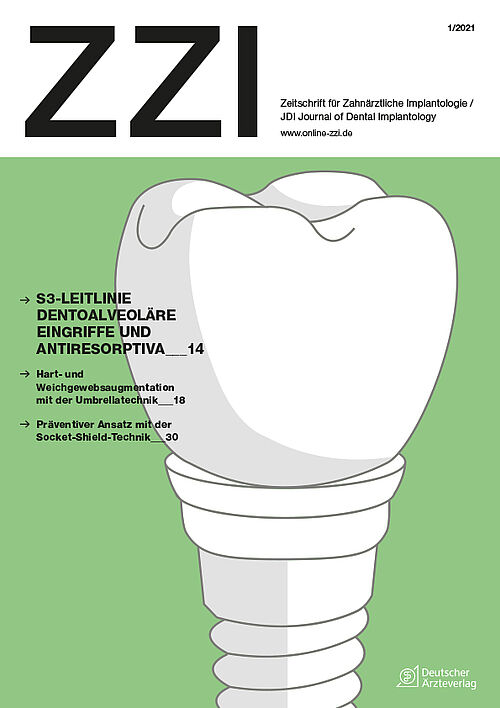